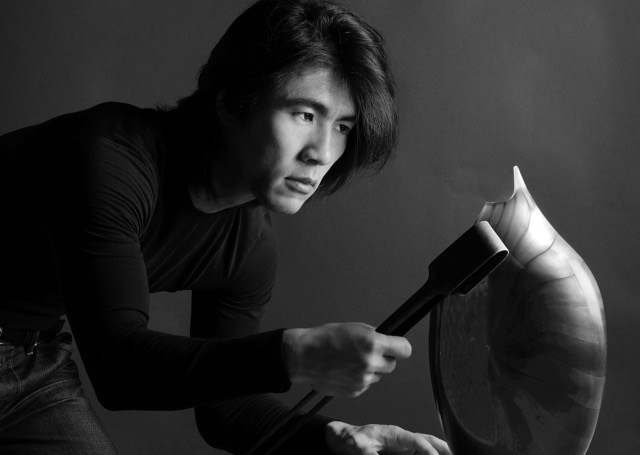 He is the only Japanese glass artist to run an atelier on Murano, the island of Venetian glass. Most of his work centres on glass, but he also works with oil painting and video art.
Renowned for his strong messages, conceptual ideas and philosophy which lie at the foundation of each of his creations, he has been called “the poet of glass”, and has recently achieved recognition for his work in other fields, such as writing, cooking, architecture, film, fashion, music, and for his collaboration with other artists. He was born in Osaka in 1969. He graduated in 1988 from the Tsuji Culinary Institute and left Japan to move to Paris, to perfect his understanding of food and art. In 1992, he moved to Venice, Italy, where he first worked as a cook at the famous “Harry’s Bar”, owned by the Cipriani family, while participating at the same time in art exhibitions in many different venues.
In 1995 he began to work as a glass artist on Murano. In 1996 he became the Art Director of the Schiavon Glass Company. That year he created the “Bamboo Collection”, a series of glass sculptures on the theme of Japanese bamboo, which was exhibited world wide, winning critical acclaim. In 2003 he became the Director of the Laboratorio del Vetro Veneziano. In 2004 he won the Honorary Technical Award in Dusseldorf. In 2008, he won the Cultural Promotion Award from the City of Grosseto in Tuscany.
In 2008, he represented Japan at the eleventh edition of OPEN, the International Sculpture Exhibition, and won the Grand Prize. In 2010, he was invited to participate in the Issey Miyake “IM10” Project Competition. In 2012 he made “Imagine”, a series of poetic pieces crafted in white glass, which captured media attention. In 2013 he created “Crossroads of Fate”, in which he successfully combined transparent coloured glass with a special polishing technique.
In 2013 he also participated as a Venetian glass artist in “Ask This of Rikyu”, the film that won the Best Artistic Contribution Award at the Montreal Film Festival in 2013, as well as nine awards from the Japan Academy. In 2014 he won the Contemporary Fine Japanese Arts and Crafts Award at the 53rd Contemporary Fine Japanese Arts and Crafts Show.

He later exhibited in eight venues around Japan, including the Metropolitan Museum of Art in Tokyo, the Kyoto Municipal Museum of Art, the 21st Century Museum of Contemporary Art and the Kanazawa and Shizuoka Prefectural Museums of Art. In 2014, he also collaborated in an exhibition of glass and flowers with an Ikebana Sogetsu artist at the Tokyo Department Store Shibuya Branch Art Gallery. He was also invited by the Okinawa Ryukyu Glass Craft to work on his new piece “Minzokusei . DNA” for four months. In 2015, he made a work in glass representing the artistic calligraphy of Sisyu for the Japanese Pavilion at EXPO in Milan. He also published the collection of works titled “The Crossroads of Fate”.

The book won first prize at the National Book Competition in Japan. He also held a personal exhibition entitled “Dna – ethnicity” at the Museum of Contemporary Art in the Prefecture of Okinawa. In 2016 he worked with architectural firm 403 [dajiba] for the Biennale di Venezia Architecture Exhibition.