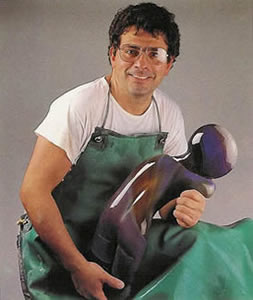 Dino Rosin was born in Venice on May 30th, 1948. His family moved to the island of Murano glass when he was only two months old. He left school at the age of 12, and began to work as an apprentice at the Barovier & Toso glassworks, where he remained until he joined his brothers Loredano and Mirco at their “Artvet” glass studio.
Dino worked at ArtVet through 1975, when he moved to the new studio founded by his brother Loredano, to work as his assistant. Dino collaborated with his brother for almost 20 years. He was Loredano’s right-hand man, and at the same time became a true master at coldwork. From then on, Dino worked with Loredano in the morning in the glass studio, and in the afternoon developed his creative talent, studying raw materials and glass fusion techniques. In the evening he worked on designs and studied “cold-shaping” (cutting, grinding and polishing glass). He was soon considered to be one of the finest talents on the island, and one of the most skilled Masters.

His elder brother Loredano, born in 1936, was rapidly gaining fame as a Maestro. He had already worked with Picasso, Chagall, Jean Cocteau and Le Corbusier, to mention only few of the great Artists who had come to his glassworks-studio. In 1977, Loredano and Dino were successful in recreating “calcedonia”, a type of glass discovered by Angelo Barovier in 1480, the secret of which had been lost for 500 years. It was a real achievement.

In 1988 the two brothers and the American glass artist, William Morris, were invited to the Pilchuck Glass School in the state of Washington, to demonstrate their skills in shaping solid glass sculptures. Loredano died in a boating accident in 1991. It was three months before Dino returned to work, but he did so with new determination. With the help of his son, Diego, and brother Mirko, he began to work as “primo maestro”, initially reproducing his brother’s designs and personally finishing them. His first appearance in America in 1993 was a great success.