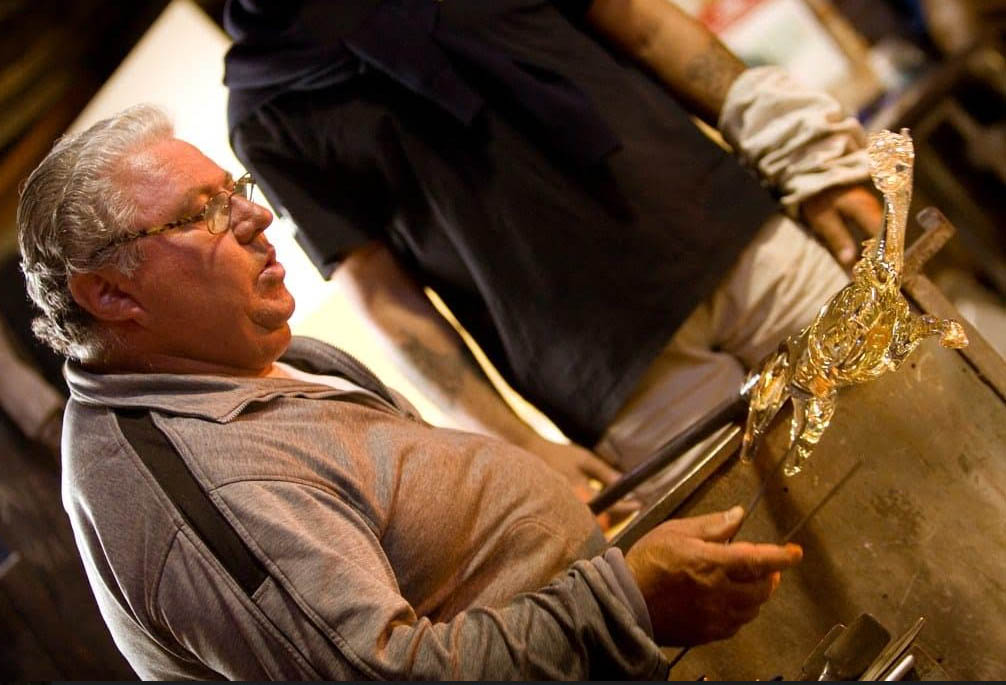 Arnaldo Zanella (1949), was born in Sant’Erasmo, a small island in the Venetian lagoon. Most of the people born and raised on a small plot of land dedicate their life to agriculture, but Arnaldo’s life had to be different. As a young man he fell in love with glasswork and at the same time worked to help his family. On visiting a furnace with a relative, he observed the intense activity, the heat and the men drenched with sweat, and made an obvious decision. He wanted to be one of them. Around the years 1950-1960, the most popular and important glassworks on the island was Seguso Vetri d’Arte, an authentic breeding ground of artists. He worked side by side with Alfredo Barbini, Angelo Seguso, Ermanno Nason, Pino Signoretto and many others. Angelo Seguso chose him as his assistant. When Pino Signoretto opened his furnace-studio (1978), Arnaldo followed his friend in his new endeavour. During those years he attending evening drawing classes, where he learned artistic drawing and acquired a cultural background. Following his experience with Angelo Seguso and Pino Signoretto, he was ready and able to move on independently as a Master at the highest level. In 1985, with several friends, he opened a studio that they called “Andromeda”. He has always had a predilection for the brilliance of opalescent coloured glass and this characteristic turned Arnaldo into an innovator of sculpted goblets. His love of nature led him to portray animals, especially horses, tropical birds on glass trees, and so on. Arnaldo is a latest-generation poet, who has won the full appreciation of connaisseurs on every continent. Since 1991 he has worked with and for his fraternal friend Oscar Zanetti at the Arte Zanetti Vetro Corporation.