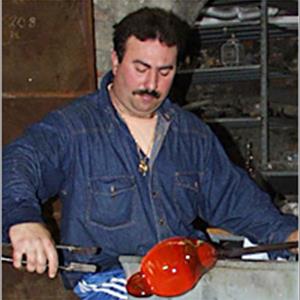 Oscar Zanetti was born in 1961 on Murano, where he currently lives and works. His family has lived on the island forever. One of the most important members of his family in past generations was the Abbot Vincenzo Zanetti (1824-1883), who founded the Glass Museum in Murano. He also developed a series of research studies on types of glass that proved extremely important in the years to come, and wrote the only existing guidebook to the island (1869).

Oscar began to work at a very early age. He attended the Art Institute of Venice in the morning, and spent the afternoons perfecting his knowledge of different types of glass. Like every other apprentice, he initially had a hard time. Oscar’s professional training lasted fourteen years, working in the most prestigious glass factories such as Venini, La Murrina and Barovier&Toso. In 1986 his father Licio, also a great Murano glass Master, brought him into the family furnace to improve his technique and stimulate his young talent. Seven years later (1993) his dream came true.

The furnace allowed him to fully express his imagination and creativity.
The collaboration with Daniele Lucchetta and other artists of his entourage gave him the opportunity to create exquisite original pieces. Many contemporary international artists have relied on the help and the skill of this excellent artisan to create their works of art. Since 1993, he has periodically organized international exhibitions, and every year presents his best creations at “Venezia Aperto Vetro”, the most important event, in the “Emerging Young Talents” pavilion.