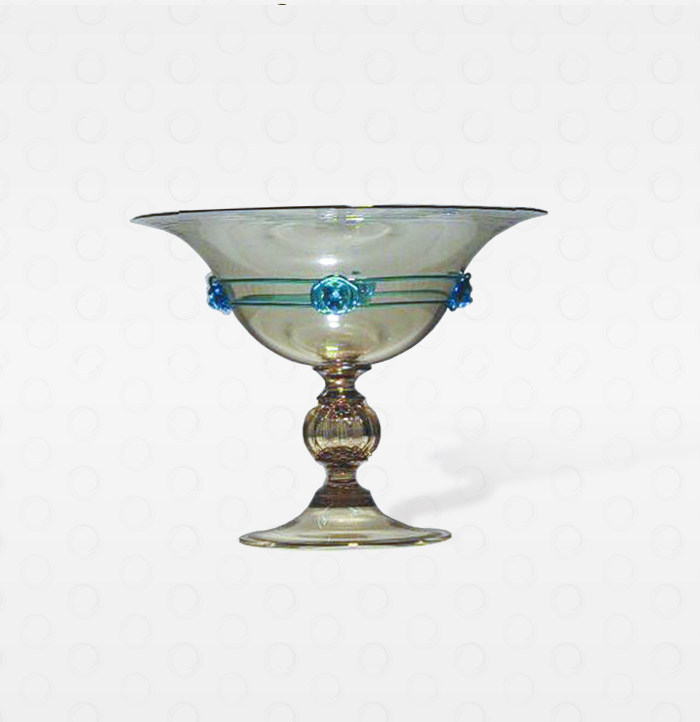 Born in 1962 on Murano, Fuin still lives and works on the island. Considered one of the most skilled masters of the last 30 years, he has collaborated with Italy’s famous glass houses including Venini, Toso, Pauly, Salviati, Elite, and De Majo, as well as with many international artists and designers. Every year Fuin spends several weeks teaching at art schools and studios around the world, including The Studio at CMOG. His work can be found in major galleries as well as private and museum collections in Europe, the United States, Japan, Korea, Saudi Arabia, EAU, and Australia.Known widely as the crème de la crème, Fuin’s work defines classic Venetian glass. In 2000, he began producing a collection of goblets, vessels, and traditional Venetian baskets in avventurina glass. His goal was to open new markets and appeal to a more exclusive clientele. The number of pieces and the preciousness of the sparkling, seemingly copper-infused glass elevates this body of work beyond the functional. Fuin’s avventurina collection makes an artistic statement about traditional technique and the unimaginable beauty possible only at the hand of a true maestro.

Davide Fuin grew up around glass on Murano, often accompanying his father to his job at Barovier & Toso. Although he was too young to actually work, he was fascinated by the activity and the interactions between the glassblowers. When he was fifteen, he left high school and, as was required at that time, he went to work at a glass factory. What was generally considered a punishment, was for him a revelation. He found his calling.

In 1968, he began working at Venini and in 1980, a number of masters, including his father, left Barovier & Toso to open their own factory,Toso vetri d’arte. He joined his father and began working with the master Carlo Tosi Caramea.

By the late 1980s, Fuin was considered a young maestro and a new factory, Elite Murano, offered him the position of first master, with his father as the principle assistant and support.

In the late 1990s, Fuin founded D.F. Glassworks with two assistants. They primarily produce glasses and stemware, together with museum reproductions in Venetian style.

Although he doesn’t consider himself an artist, he takes great pride in his abilities to carry on the specific craft and language of forms developed in the furnaces of Murano over the last thousand years.